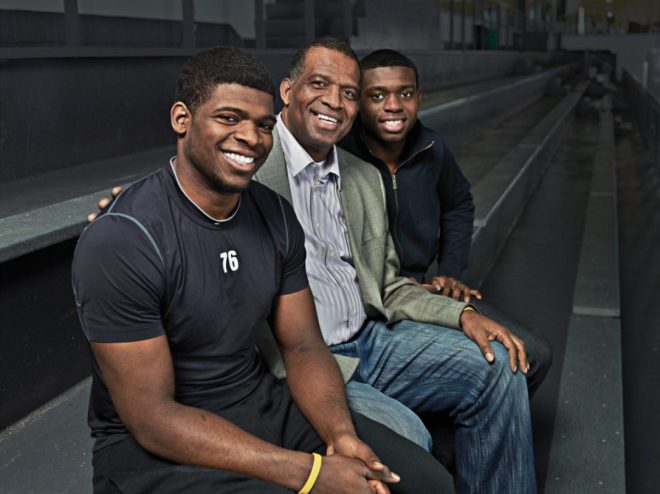 Karl Subban with his sons, P.K., left and Malcolm. “When it comes to your own children, I’ll do whatever I have to do. That’s what you signed up for as a parent,” Subban said.

Late in the Game parenting column, The Toronto Star

“You are their idol. They look up to you. They don’t do a good job listening to you, but they do a fantastic job imitating you.” — Karl Subban on being a role model to your children

You may not know who Karl Subban is, but he was one of my heroes when I was a teenager growing up in Thunder Bay.

Today, Subban is a just-retired 55-year-old Toronto school principal and NHL hockey dad. His son P.K., a star with the Montreal Canadiens, was named the NHL’s top defenceman. His sons Malcolm, a goalie, and Jordan, a defenceman, have been drafted by the Bruins and Canucks, respectively.

The father of five has been written about before, not just because his children became hockey stars, but because of his inspirational work as an educator and role model for children in Jane-Finch, one of Toronto’s toughest neighbourhoods.

When I launched this column in April 2012, one of my goals was to track down Subban and interview him about inspiring children, especially one’s own. That happened a few weeks ago after a publicist emailed me to see if I wanted to interview Subban about his role as an ambassador for Hyundai Hockey Helpers, a program that offers grants to Canadian children to cover registration and equipment fees for kids who otherwise could not afford to play.

I could not have responded faster.

In 1979, just before I turned 14, I enrolled in a basketball camp at Lakehead University. I loved basketball and my goal was to make the junior team as a freshman.

Subban played for Lakehead and was one of the camp instructors. Not only was he a good player on a good team (L.U. was a Top 10 team nationally) he was a fantastic teacher.

The kids fell in love with him immediately. You could tell Subban cared about each kid and wanted them to be the best player they could.

Most importantly, he showed us how to work hard and believe in ourselves. He taught that through his own work ethic. My friends and I watched the Lakehead practices: when the other players went to shower, Subban stayed to do drills on his own.

I was one of three freshmen to make the junior team that year. Two years later, I was allowed to play in a summer league made up of senior high school and university players, although I was still a junior.

Subban was my captain.

Subban played the entire game and during timeouts he’d try to instruct us.

I came off the bench and tried not to screw up.

That fall, I got a job stacking shelves and bagging groceries at the A&P. Subban worked there, too. He knew who I was. I felt like the coolest kid.

I caught up with Subban two weeks ago by phone. It came as no surprise to me that Subban would leap at the chance to be an ambassador for Hyundai Hockey Helpers. He told me he signed up his entire family.

Subban was 11 when he moved to Sudbury from Jamaica and his parents couldn’t afford to buy him hockey equipment.

He fondly remembered his days in Thunder Bay. “Working at the Lakehead basketball camp put me onto teaching,” he said. “Basketball taught me how to work hard and be persistent.

“Working at the A&P, I learned life lessons. I knew I didn’t want to work there all my life,” Subban said, then laughed.

That’s something else we have in common.

His dream was to play in the NBA. While that didn’t work out, it led to his career in teaching, which became his passion.

I have 15-month-old twins and I want them to be active in sports, not video games. I asked Subban for advice.

“I learned with P.K., that whatever he was doing, I was doing.”

Subban recounted how his grandson recently had a skating lesson and cried the entire 30 minutes. That’s because his mom and dad and granddad were not on the ice with him, Subban said.

P.K. started skating at 2 ½. When P.K. was 6, Subban decided P.K. would skate everyday. At the time Subban was a vice-principal at Runnymede Collegiate and had night school duties. When he arrived home, he’d wake up P.K. and take him skating at Nathan Phillips Square.

“I was skating with him,” he explained.

Subban played basketball with his talented daughters, Nastassia and Natasha, and hockey with his sons. Like Walter Gretzky, he built a backyard rink.

With five kids, the family also had to attend a lot of events together and make sacrifices. A hockey trip to Kingston, for example, became a family holiday.

Time for himself was scarce.

“When it comes to your own children, I’ll do whatever I have to do. That’s what you signed up for as a parent,” he said.

“We’re the director. We clear the way, then get out of the way. You can’t give your kids any better.”

Subban also talked about the importance of fostering children’s dreams. That’s what he likes so much about the hockey helpers program: all kids can dream of a career in the NHL — and it doesn’t matter if they don’t make it.

“It is so important to have dreams and to work hard to fulfil them. You don’t know where you’ll end up,” Subban said.

I don’t have many heroes, but Subban is still one of them. Maybe even more so now.

Our 30-minute talk inspired me as a father, to be the best dad I can be. I’ll admit, on many days the workload and constant pressure to provide can be draining.

Subban said the struggles are worth it.

“If I could, I would do it over and over again,” he said of fatherhood, “but God only gave me five children.”

Now, how can I complain about twins?

Here is a link to the profile.